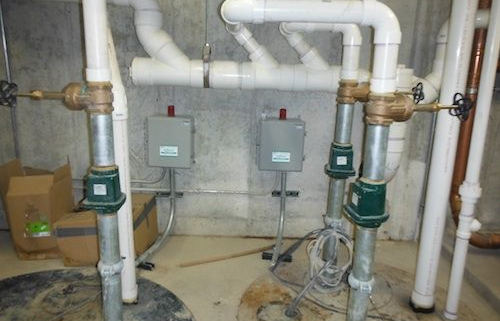 In above-grade homes, sewage systems operate based on gravity, wherein sewage flows downhill and enters a municipal sewer line or a septic tank.  However, sewage that originates in a basement of a home is typically situated below septic or sewage lines and gravity can’t be applied to move the waste.  In such instances, a sewage pump needs to be installed.

The function of a sewage pump is to move sewage liquids and solids between one location and another.  Typically, in residential applications, sewage (including soft solids up to 2″ in diameter) is pumped from a sewage basin to a sewer system or a septic tank.  A sewage pump is installed at the lowest point of the sewage basin.  The basin itself is placed at or below the floor level of the basement.

Since the pump is submerged most of the time, it is also referred to as a submersible sewage pump. Sewage pump can be automatic, manual, or dual (piggyback) mode.  Manual pumps need to be manually turned on/off as the need arises.  Automatic pumps have a floating switch, which turns the pump on and off whenever sewage in the basin reaches a certain (usually pre-set) level.

Due to the possibility of sewage overflow, it is generally not advised to use a manual sewage pump inside of a sewage basin.

Sewage pumps are centrifugal pumps, with special design considerations enabling solids to pass without clogging the pump.  When the pump is turned on, the motor starts to rotate the impeller, creating the pressure that pushes water into the impeller and from there into the discharge pipe.

The pump housing, which contains a motor and an impeller, is made with cast iron and is built for long-term use. Sewage pumps come with legs attached to the housing, which keeps the pump a few inches above the bottom of the barrel.

While the most common use of a sewage pump is to pump residential waste, some models can also be used in industrial, commercial, and agricultural applications.

Is Your SumPro Battery Defective? Elgin, IL
Scroll to top